If you come across about the symbol of Hanoi city, the answer might always be “Hoan Kiem Lake”- considered as the heart of Vietnam’s capital and situated inside a complex of Ngoc Son Temple, The Huc Bridge, and Pen Tower in the surroundings.

The unique point of Hoan Kiem Lake (also known as Ho Guom lake) is not only its look as a romantic beautiful picture but also the root of many stories associated with the birth and existence of Hanoi past and present. 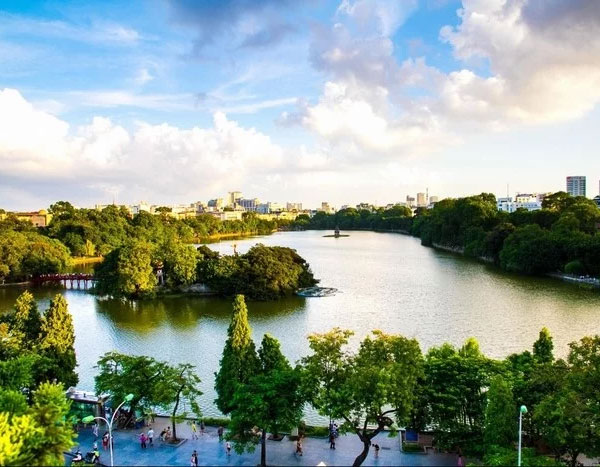 The History of Hoan Kiem lake

According to the legend, in the 15th century, the lake was renamed Hoan Kiem Lake, associated with the legend of returning the sword to the Golden Turtle, recording the victory of the Vietnamese people battle against the Chinese Ming dynasty (1417-1427) under the leadership of Le Loi. Le Loi uprising in Lam Son (Thanh Hoa) got a sword, then picked up a hilt. The sword helped them push back the enemy, he ascended the throne to set up his capital in Thang Long. One time Le Loi was on a dragon boat cruising around Hồ Lục Thủy (Green Water Lake), when they came to the middle of the lake, a giant turtle with a golden shell (Kim Quy) emerged from under the water surface sucks the sword and sinks to the bottom lake and then, Luc Thuy Lake has a new name Hoan Kiem Lake or Guom Lake.

In the Le Dynasty, the lake was also used as a training ground for marines, it was sometimes called Thuy Quan lake. 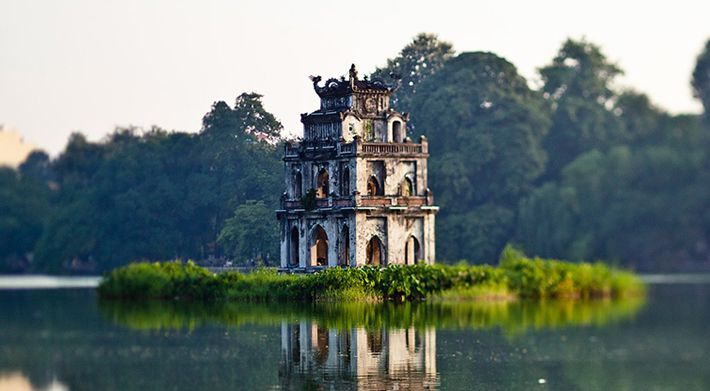 The Highlight of Hoan Kiem lake

There is no doubt that Turtle tower is one of the highlights in Hoan Kiem lake. Turtle Tower was built in the centre of the lake influenced by French architectural features. The rectangle-shaped brick tower has four facades and four storeys. The architecture of each floor is quite similar. Turtle Tower is considered as a historical and sacred architecture for not only Hanoi people but also Vietnamese people. Especially, coming to Ho Guom, almost everyone takes some time to step on The Huc Bridge leading to Ngoc Son Temple. The bridge is well-known as “the bridge where light is absorbed”. The combination of  Ngoc Son Temple and Hoan Kiem Lake has created a unified Thien - Nhan architecture overall creating a harmonious ancient beauty for temples and lakes. Besides, Ho Guom lake is also associated with other places such as Thap But, Dai Nghien, Temple of King Le.

Because of its historical value to Hanoi and the whole of Vietnam, Ho Guom lake has become a must-see destination for many tourists whenever they arrive in the capital.