Hoi An Ancient Town was inscribed as one of the World Heritage Site in 1999. Hoi An is a special example of the important trading port from the 15th to the 19th century.

The atmosphere of present-day Hoi An is unique, but the flavour is faintly reminiscent of other ancient ports, such as Amsterdam or Florence. In Hoi An, you can stay in an ancient- style hotel, walk along narrow streets lined with houses that seem to have grown there, and have a drink on the riverbank as the sunsets. 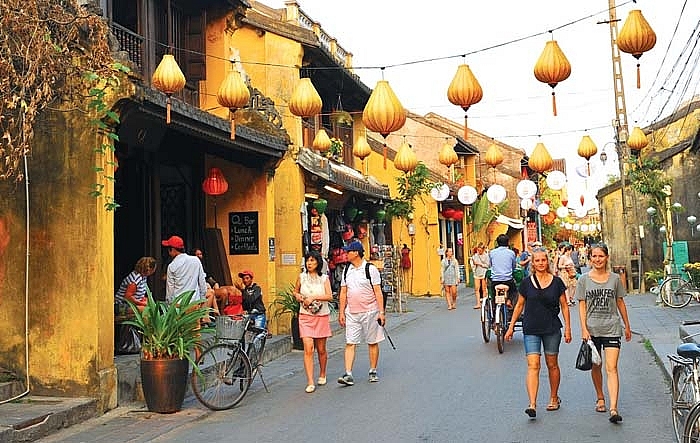 The main street of the ancient town Hoi An at present was known also during the XVII, XVIII. If we pay attention to the way they built street in the old days, we will see the town, to the final analysis, includes only one main street like Vinh Dien, Tam Ky. Although Hue was capital, it had only one main street running through Dong Ba market. And, Da Nang in the early days was composed of only one street which was known as Tran Phu nowadays. Hoi An like other townships of the old China had its main street looking out to the river. To the far west was the bridge Pagoda and to the far East was Ong Bon Pagoda or the temple dedicated to the worship of General Phuc Ba. This street during the French time was called Rue Du Pont Japonais, the only street of the township, Tran Phu nowadays. In 1841, the second road was made of the mud and was named during the French time, Rue Cantonais, i.e. the road of Quang Dong, called Nguyen Thai Hoc at present time. Formerly, it was a prosperous area because it was ‘a warehouse’ of cinnamon and centre of trading meetings. The third road close to the riverbank made of mud was built in 1886, first called riverbank road, then Bach Dang. It was here that the boats and ships gathered busily from the upstream of Cui River and all directions The riverbank full of sails echoed the oaring and trader’voices. Present here were not only Chinese but also rich Vietnam owners of boats, ships bound for the North and the South. Hoi An market was located on this road, specialized in not only consumer goods, but seafood as well. Foreign travel reporters used to remind that this market must have been built long, long time ago, during the previous centuries, because it had been situated in front of the Quan Kong Temple. It was the Vietnamese custom that the market was built by the worship place with a large yard in between. That space, except the trees or plants, did not allow for any housing. Therefore, the market could be built in the middle of XVII, if the Quan Kong temple was built in this period. The temple was built by the Ming Chinese who had evacuated from the Manchus as refugees and was used as a centre of Chinese in exile.

Back to the main road, named as the Bridge - pagoda street, it was the highlight of Hoi An without which Hoi An would have been an area of the old, rotten and soulless house although it was formerly a centre of trade.

On Tran Phu street nowadays, we can see many repeatedly reconstructed old houses made mainly of wood. In the previous centuries, in Hoi An, houses were made of bamboo thatches, later of wood and stone. Later on, were made of brick walls in the architectural style as seen nowadays, which indicated Hoi An received the age-old urban architecture, together with the high- technical and sophisticated uses of wood materials for the traders’ houses or worship places.

Right at these places, we can see the diversified aspects of the building arts of the Southern Chinese. I want to refer to the Assembly Halls also called the Chinese Pagodas, built by the Chinese for meeting or gathering of the local Chinese who had come from many parts of China.

They are named Pagodas, but they are used to worship holy gods, mostly used to provoke the examples of righteousness or the ability to rescue the sea travellers. All these been renovated, therefore a year of construction should be used for time marking. 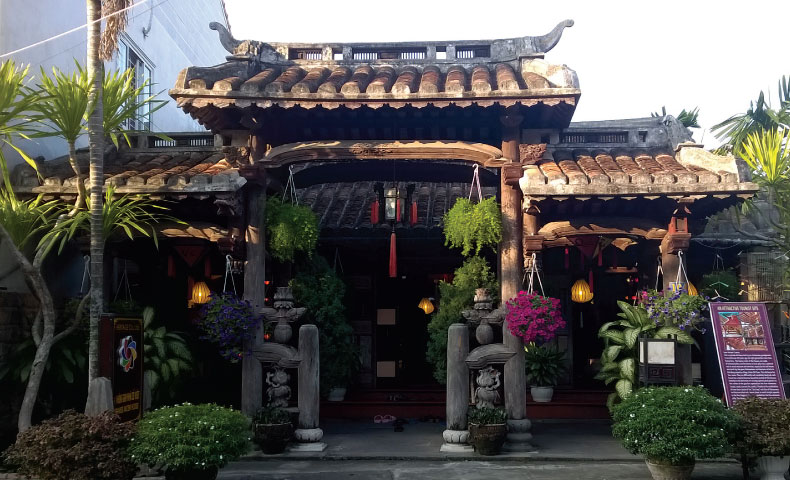 Many old houses in Hoi An should be known to researchers and visitors. These houses were featured strikingly by the length, lying close together in the wide and airy lanes. Many of these houses were called “Mouse houses” built with a “warehouse” in front and a commodity carrying passage from the front warehouse to the rear one. In- house gardens with decorative plants were places where the house owners relaxed, drinking tea, smoking, enjoying Nature at their leisure. Chinese had the term “rear or back garden” to refer to the garden in the back of the house, but the Vietnamese had the garden in front of the yard. The big traders’ houses were with the lofts in the special architectural style into which the wood was brought by the alley from the ground floor. Houses in Hoi An were different from one another except for the Eight- Sign on the front door. These Eight- Signs were covered with the pink cloths to make themselves look solemn during the ceremonial days.