The Imperial City of Hue 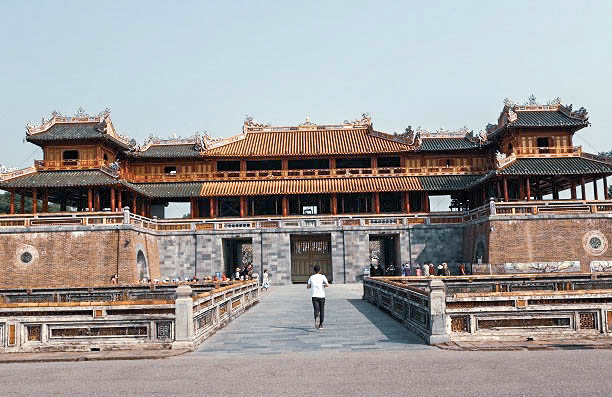 As far as the architecture is concerned, the Imperial City was built by a French architect Vauban. The city has three perimeters of rampart: The Defensive Fort (the Royal Citadel),the Imperial Enclosure and the Forbidden Purple City.

The Defensive Fort, the outermost boundary has a perimeter of 9950m, a thick of 21m, with 10 gates opened to road travellers and two gates for water routes and 24 forts.

The Imperial Enclosure is the second rampart with a perimeter of 2450 m. It is accessible through four gates: Ngo Mon (Noon Gate) to the south, Hoa Binh (Peace) to the north, Hien Nhon to the east, and Chuong Duc to the west. Ngo Mon is the main entrance gate of the royal city. Formerly, it was reserved only for the passage of the kings. This is among the few ancient infrastructures that have remained almost intact. 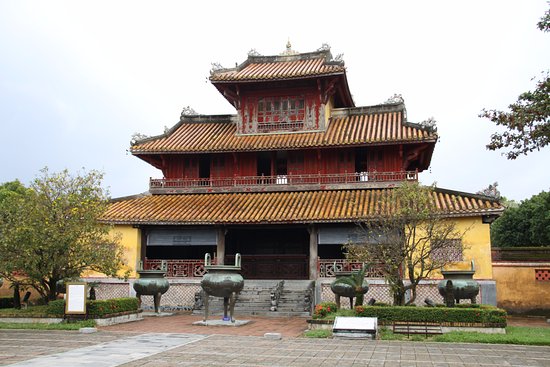 Forbidden Purple City, the third and the innermost fort of the royal complex has a perimeter of 1225m. Accessible through seven gates, it was the place reserved for the private life of the kings and their families. Forbidden Purple City was almost isolated from the outside world.

Ngo Mon (Noon Gate) – this three storeys structure is 58m long, 27.5m wide and 17m high and serves as the main entrance to the Imperial city. There are five gates to Ngo Mon with the central gate being reserved for the kings only. The two adjacent gates on both sides of the central gate are used for servants and members of the royal entourage. On the top of the arch is Five Phoenix Tower, which was formerly the place where the king was seated on festive occasions. This was also the place where ceremonies were organised to announce the names of laureate candidates from royal examinations before those names were put on the notice board hanged on Phu Van Lau (Phu Van tower). During Nguyen King’s reign, Ngo Mon gate was opened only when the king was passing by or receiving foreign ambassadors.

Thai Hoa palace (Palace of Supreme Peace) was used for the king’s official receptions and other important court ceremonies such as anniversaries and coronations.

The Mieu was one of the shrines and temples dedicated to the kings and royal members of Nguyen dynasty. Within Hoang Thanh, there are five temples. Trieu Mieu, Thai Mieu, Hung Mieu, The Mieu and Dien Phung Tien.

The Nine Dynastic Urns were cast between 1835 and 1837 and weigh between 1600 and 2600 kg each. The cast of the nine urns cost up to 20 tons of bronze copper. Each urn has a different name: Cao, Nhan, Chuong, Anh, Nghi, Than, Tuyen, Du, Huyen. The urn named Cao is the biggest, weigh 4307 can (2601kg),high 2.5m. These urns are the greatest achievements in bronze casting in the 19th century in Vietnam. Each urn symbolizes a king’s sovereignty and the whole row urns represent the power and stability of the Nguyen throne. The designs, based on the classic motifs, including the sun, the moon, clouds, mountains, rivers and science from everyday life. Many consider the nine urns as a summary encyclopedia of Vietnam’s landscapes and farming products and animals.

Hien Lam Cac is regarded as a memorial monument to remind younger generations of those people whose merits and contributions to the founding of the Nguyen Dynasty had been recognized by the kings.